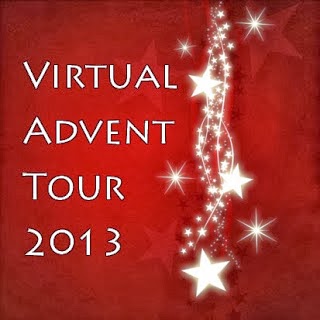 If you are counting down, then you will know that it is two weeks until the big day! Maybe you've been checking off items on your to do list?? Checking it twice even?

Hopefully you will have time to visit our gracious hosts for today:

Meryl @ My Bit of Earth

Today's quote comes from pages 220 to 221 of Lilla's Feast by Frances Osborne. By way of introduction, Lilla's husband, Casey, has been arrested by the Japanese soldiers who have invaded China, along with many other Western businessmen. Not long after this all other allied nationals are also arrested and put into prisoner camps.

I often find myself drawn to quotes about how Christmas was for people during war times or other forms of adversity.

On Christmas Day 1941, as a gesture, as if clinging on to the idea that this was an honourable war, the Japanese let the businessmen go home briefly. Just long enough for a church service and Christmas lunch. Lilla, Casey, Mabel, Vivvy and Mabel's mother - Lilla's family in Chefoo - would have eaten together. Vivvy and Casey would not have a uttered a single word about what they were going through in the hotel, not wanting to worry their wives any more than necessary. But, looking at their husbands' pale, wasted faces, Lilla and Mabel would have known without asking that something awful was happening to them.

I am trying to imagine their meal. Lilla must have been living off peas, beans, lentils and peanuts, as everyone else in Chefoo was doing at the time. "Just as nourishing as meat," she later wrote, "especially if suet dumplings, bacon or fried bread are served with them." But on Christmas Day Lilla must have managed to lay her hands on at least a chicken, its flesh lean and taut from age. Her chef long since gone, she would have basted it again and again in its own thin juice, kept it well covered, not allowed a drop of moisture to escape. Still, it can't have been the same as turkey or goose. They must have chewed through their mouthfuls, puhsing a smile on to their faces between each bite. Trying to have a normal Christmas conversation, talking about anything they could think of except the war. If they could think of anything else at all. They they would have exchanged presents. Something small, a token. A favourite piece of embroidery. A drawing. A card. It was hard, almost impossible, to find anything new, so, like everyone else in Chefoo, they circulated their own treasures. Then tried to sing, Casey and Vivvy mustering all the enthusiasm they could, with Lilla accompanying them on the piano, striking chords.

When the soldiers came back that afternoon to take the men away again, they took Lilla's car with them. The car she'd boasted about to Ada. the car in which she and Casey had gone on so many picnics and dashes across the peninsula to see her brother Reggie in Tsingtao. Or even just out at night, when it was too cold or wet by far to walk. by Christmas 1941, there hadn't been any petrol for over a year. Still, the car has been sitting in the garage as if one day soon she'd take it out again. As the Japanese soldiers drove it off, they took that hope away too.

This sounds like an excellent story. I'm already invested in it and now I must read the whole thing. Thanks for sharing.