We are now half way through the tour, and I have to say the posts this year have been amazing! Just yesterday we had posts on an Australian Christmas tradition, and then a Finnish tradition, and then some US posts! This is an example of why I love doing the Advent Tour - seeing posts from all over the world!
Shanyn @ Chicks Love Lit
*Katie @ Book Addict Katie
*Carol @ Carol's Notebook
*Deborah @ Homemaker Honey
*JNCL @ The Beauty of Eclecticism

Today's quote comes from The Very Thought of You by Rosie Alison, which tells the story of a young girl who is evacuated to the English countryside during World War II. 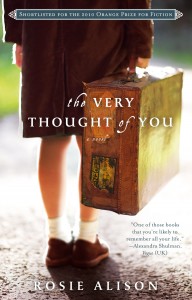 Some of the evacuees never got letters, but they still could not resist hovering on the outside edge of the letter crowd with forlorn eyes. Yet even for those who were remembered, there was still a dull ache of homesickness which never really eased, running like a buried river through their daily lives.

December, in particular, was a time when many of the children grew sad, and in the years to come, Anna would never forget her wartime Christmases so far from home. But she would remember, too, how generous the Ashtons were, always making sure that every evacuee had a gift under the tree. And how on Christmas Day itself they all shared a hearty lunch, with the rare treat of roast chicken and crispy potatoes, with plenty more vegetables from the grounds.

Yet none of those consolotions could ever quite staunch the Christmas night tears in the dormitories. The remembrance of home, of mothers, of fathers. The emotional wasteland of their lives without them. It would take years for many of them to dare to love again.

Those children bore the pain of becoming temporary orphans, even though it was done with the best of intentions. A very bittersweet Christmas memory.