It's Friday! Thank goodness. My job gets really busy every time there are public holidays but Christmas and Easter are even more busy than the others. I am really glad to have made it to the end of the week and have some time to relax. I have already started with a generous slug of Baileys but there could be more by the time this night is done.

Hopefully you will have some time to relax and visit our hosts today who are:


Over the last couple of weeks I have been listening to the audio version of Wolf Hall by Hilary Mantel, and have loved the audio version! I know, I am about 3 years behind every one else in reading this book but what can I say....better later than never! I won't be waiting 3 years to read the follow up book! 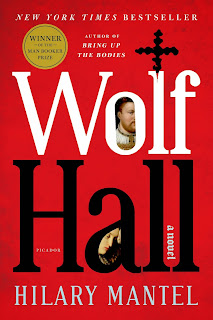 At Whitehall - York Place, as it was - the builders are still in. For Christmas, the king had given Anne a bedroom. He led her to it himself, to see her gasp at the wall hangings, which were of cloth of silver and cloth of gold, the carved bed hung with crimson satin embroidered with images of flowers and children. Henry Norris had reported to him that Anne had failed to gasp; she had just looked around the room slowly, smiled, blinked. Then she had remembered what she ought to do; she pretended to feel faint at the honor, and it was only when she swayed and the king locked his arms around her that the gasp came. I do devoutly hope, Norris had said, that we shall all at least once in our lives cause a woman to utter that sound.

When Anne had expressed her thanks, kneeling, Henry had to leave, of course; to leave the shimmering room, trailing her by the hand, and go back to the New Year's Feast, to the public scrutiny of his expression: in the certainty that news of it would by conveyed all over Europe, by land and sea, in and out of cypher.