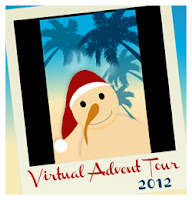 Today's stops on the Virtual Advent Tour are at:

The first part comes from page 113: 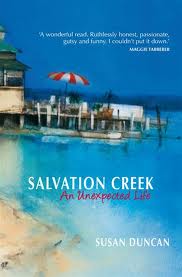 But my brother is dead. And Christmas since his death has been more of an ordeal than a celebration. However, this first Pittwater Christmas, when I live in the wooden house set at the water's edge, I am determined to get organised in a way that my brother would have approved, revive the Duncan family tradition. I want it to be a grand time for the fourteen people who will gather around the table on the deck at about noon. My goal is to restore, if I can a little of the old joie.

I begin making the pudding only a week before Christmas Day. Which is a bit scary because it's a three-day process. First, double the recipe. Then candy the orange and lemon peel and soak the raisins, sultanas, dates and currants in four times the suggested amount of brandy, letting the fruit sit for a couple of days.Stir (by turning over, not mashing!) every time you go past the bowl and make a wish. Invite everyone who passes to stir and make a wish. Watch them succumb to the sweet, dizzying brandy fragrance. see them close their eyes, breathe deep and hold their breath. Then wish.

'Never heard of this tradition,' Marie notes, wielding the thick wooden spoon. 'But it's a great way to get your pudding mixed!'

For a moment I wonder if it's a tradition. Then I remember Christmas at the pub. A local woman, famous for her puddings, soaked bucket loads of dried fruit in rough-as-guts brandy for a day or two in an old tin baby's bathtub in the pub's concrete-floored laundry. A barrel of batter, made from butter, eggs, dark brown sugar, ginger and flour, was poured on top, bringing the mixture to almost the rim of the tub. It was too huge and heavy for one pair of hands to mix, so the tub was ceremoniously dumped in the public bar for a couple of hours and everyone asked to have a stir and make a wish. By the time the bar closed at six o'clock, the batter had been turned over hundreds of times and the fruit was well and truly mixed in. A bit of cigarette ash and a slop or two of beer as well, I suspect.

After mixing, the batter was divided up and wrapped in steaming, floured calico, to be dumped in the copper boiler where the sheets and towels were washed on Monday mornings. The puddings were tied to a stick so they didn't sink and fill up with water, and the bobbed on the surface like giant dumplings for about six hours. They they were pulled out and hung from an indoor clothesline to cool down. I like to think now that those puddings were filled with the wishes of decent but reticent country blokes who would never dare say them out loud. As I recall, they were loaded with threepences and sixpences, which we warned guests about every year after one bloke swallowed a sixpence and nearly choked.

On Scotland Island, when I finally assemble the pudding mixture about three days before we're due to eat it, I'm anchored to the house for the next six hours, topping up the water in the pot. It's a broiling job but easily bearable. When the heat feels over-powering and sweat rolls down the valley in my back, I walk out the door and fall in to the sea. Nice life, huh?

I start making the puddings in the weeks leading up to Christmas Day, to give them time to mature. The kitchen fills with the sweet, boozy smell of dried fruit soaking in brandy. And every time I see someone new arrive at the boatshed, I fly down with the bowl and demand they have a stir and make a wish.

'Is there a limit to the numbers of wishes?' Veit asks, his long arms lifting and turning the mixture carefully. 'Or should I repeat the same one every time I stir the pudding?'

His question stalls me for a moment. Why do we always say make a wish? Why not make some wishes? Why shouldn't we be able to make as many wishes as there is time for?